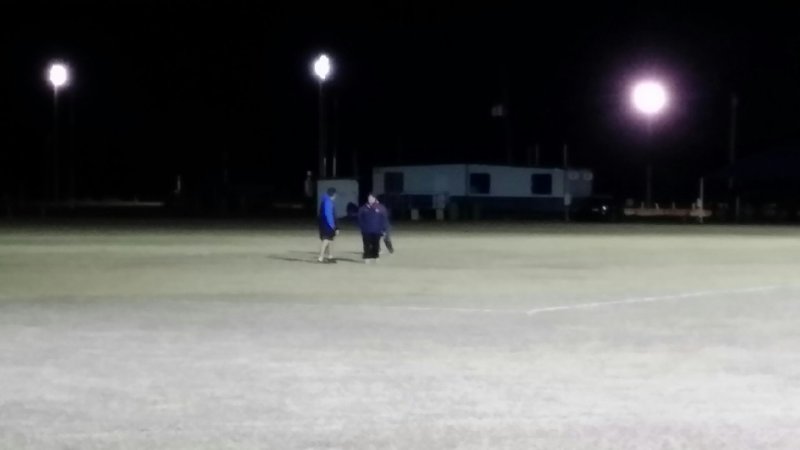 “RIP the old 2.2Kw Metal Halide Sports Field Light!! ” was a statement made at the field commissioning tonight. I wish I’d thought of it….

With capacity to dim uniformly to 50 lux for juniors, and also “zone off” and protect worn areas of the field, the LV Demons showed the same level of surprise and excitement as other sports clubs have shown when their AAA-LUX LED sports-field luminaires were first switched on.

The future is far brighter for this club than others, now with great light to train under, they now also save on future energy cost rises, and never having to replace blown lamps ever ever again.

The technology is going to save clubs and Local Governments from the ravages of energy price escalations as well as rising maintenance &  operational costs long into the future. AFL fields in particular, are susceptible and exposed to these costs, as the larger fields require higher poles, requiring larger cranes to complete maintenance & lamp replacements.

The AAA-LUX Luminaire now outperforms the older technology on most field designs, reducing lamp numbers per field escallating as lux levels increase, further reducing weight on poles, and reducing energy spend. On new projects, they also reduce cabling costs at install. Being wireless and capable of smart management, the control is simple and remote ,allowing a range of field lighting options, without cabling.

Even as the price of the old technology plummets, the ROi & TCO metrics of the 1.7 Kw AAA-LUX Luminaire continue to proof up the value of Large area flood LED, which far outweigh the “cheapest unit price” argument often offered up. Well – it’s all that’s left I suppose – a cheap price- but a high cost of operation and long term pain for both the club and/or the council or shire left with the legacy. Frankly you could have it given to you and it still doesn’t stack up.

On every other metric, it’s dead in the water!  RIP the old old burner…..may it, and it’s mercury laden components be a part of our past.